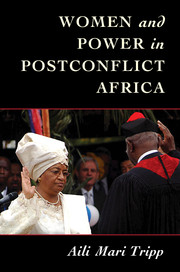 The book explains an unexpected consequence of the decrease in conflict in Africa after the 1990s. Analysis of cross-national data and in-depth comparisons of case studies of Uganda, Liberia and Angola show that post-conflict countries have significantly higher rates of women’s political representation in legislatures and government compared with countries that have not undergone major conflict.