Bianca Yue is a senior with a majors in Economics and Mathematics with a certificate in Gender and Women’s Studies. Bianca will graduate in May 2022. Read Bianca’s student spotlight to learn more.

When and why did you choose the Gender and Women’s Studies certificate? 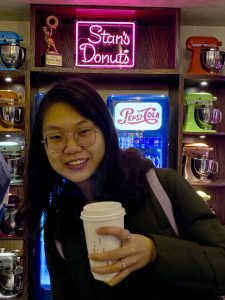 I decided to add the GWS certificate during my first semester in college. Initially, I thought the certificate had a great structure for learning gender-related topics while fulfilling general education requirements. It turned out that I wanted to take more courses in GWS after meeting all the requirements. Although English is not my first language, I feel comfortable, well-respected, and confident in expressing my ideas in GWS courses. I feel nourished in class because diverse cultural backgrounds are valued.

Have your GWS courses changed your approach to your involvement on campus, your major, your research?

My experience in the GWS department changed how I view and function in the world, how I build connections with others, and how I approach academic research.

I learned about myself through GWS courses. In GWS 102, I learned about many feminist ideologies that I had never encountered, such as gender performativity by Judith Butler and intersectionality by Kimberlé Crenshaw. These ideas resonated as if they had always lived inside me, but I did not have the language to talk about them. In GWS 200, I learned about LGBTQ+, the struggle, and the complexity of marginalized identities. LGBTQ+ was a new term for me back then. It was overwhelming to know the hardship of being queer in society. Fortunately, just as the meaning of “queer” was transformed from pejorative to activist, I later reclaimed my queer identity and became hopeful again.

Closely aligning myself with ideologies and identities in GWS, I started to read more and discuss my ideas with people around me. I 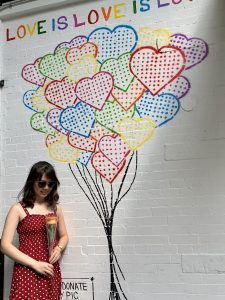 love the wide variety of topics covered in GWS courses —- everyone can find their cup of tea. Most of my elective courses study queer people of color. In my favorite class, Queer Feelings, we read “Cruel Optimism” by Laurent Berlant and “Queer Feelings” by Sarah Ahmed. We discussed love, attachment, joy, anger, hate, and how these terms have different meanings for queer people of color. I started to empathize with other marginalized people and understand myself better. This helped me tremendously in dealing with interpersonal relationships. I became more comfortable talking about identities and feelings, which connected me with people from different backgrounds. I found friends who supported my identity instead of stigmatizing it.

These experiences gave me the courage and passion to incorporate GWS into my academic work. As an economics major, I have paid attention to the American Economic Association’s endeavor to increase diversity in the profession. Only about one-third of undergraduate economics majors are female. The ratio is lower than even some STEM majors; for example, more than 40% of undergraduate math majors are female. Fascinated by the logical and analytical tools in economics, I struggled to see the representation of minoritized groups in economic courses. Sometimes, I found it hard to connect with the course materials and share my personal experience as a female international student with classmates. 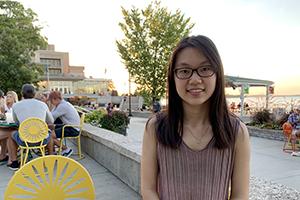 With my GWS background, I know that gender inequality in the profession leaves important questions unanswered. I have devoted my research in economics to questions about inequality and marginalized populations. One research project on gender inequality showed that the labor productivity of female-owned firms is 13 percent less than that of male-owned firms in the U.S., controlling for other variables. Differences in firm size, payroll, and startup capital account for more than half of the gap. I received positive feedback from faculty and classmates on my research topics. Special thanks to my GWS advisor Susan Nelson for talking with me about the research from a feminist perspective.

I joined the AEA LGBTQ+ economics virtual seminars and learned empirical research about minority groups. I was amazed at the creativity and inclusivity of economics research, but I noted that there were not enough theories on minority economics. So, I created a theoretical model of search and matching of bisexual individuals. Two-sided matchings between a man and a woman are the default in marriage matching theories (heteronormativity for sure). Instead of a single two-sided market, bisexual individuals search in either same-sex or opposite-sex markets or both and generate different matching outcomes. 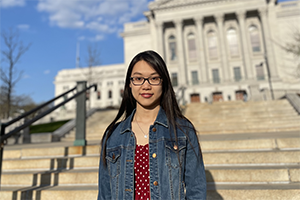 nature of economics tends to put people into boxes. For example, there must be a better way to frame a relationship than “opposite-sex” relations, since gender is not about “sameness” or “opposition.” These research challenges encouraged me to think more critically about the nuanced connection between feminism, marginalized identities, and economic research. These research experiences were extremely fulfilling. I got to combine everything I learned from GWS, my personal experiences, and my skills in economics to generate a creative research project.

What are your plans after graduation? Will your work in GWS inform these plans?

I plan to pursue a Ph.D. in Economics after graduation. My passion lies in research, but the knowledge I gained in GWS will always guide how I think about economic problems. My future research will continue to explore gender-related topics in economics. I hope to increase diversity within the the field and I look forward to bringing GWS perspectives into my future workspaces.