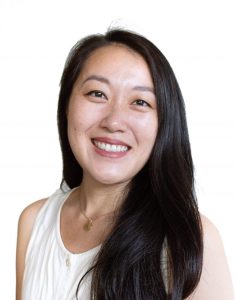 In Fall 2020, she began teaching courses in Gender and Women’s Studies and Asian American Studies. Her research focuses on Asian American racial formation and multiculturalism, family and kinship, and cultural studies of science. Read more about Professor Johnson below.

Educational/professional background:
I went to NYU for my undergraduate studies and majored in Social and Cultural Analysis concentrating in Asian Pacific American Studies and Gender & Sexuality Studies. I also worked in residential life and then academic administration at NYU too. I then went to Yale University for my PhD in American Studies and, during my time there worked at the Asian American Cultural Center for three years culminating in my term as the Interim Co-Director.

How did you get into your field of research?
I’m adopted from China and grew up in a mixed race family. I had always struggled with issues of race, gender, and belonging growing up and when I took my first Asian American Studies class my first year of college, I was so energized and excited. Suddenly, the things I had experienced not only had names but also had entire historical, social, and cultural explanations and structures that made so much sense. I was also a premed in undergrad and took all of the requirements and even the MCAT. That really sparked my interest in cultural studies of science and I wrote my undergraduate thesis on Discourses of Family and Kinship in General Biology Textbooks which solidified my passion for research and writing.

What attracted you to UW-Madison?
I never thought it would be possible to be an Assistant Professor in such established programs for both Gender & Women’s Studies and Asian American Studies. It’s such a privilege to work in two interdisciplinary programs with such collegial and rigorous colleagues and students. It is also meaningful to me to work in a public university and I have a personal connection because my mom was an alum of UW-Madison. When I got my campus interview, the first thing she told me was to go to Plaza Burger!

What was your first visit to campus like?
My first visit to campus to interview for this position was actually postponed because of the Polar Vortex! But when I finally did arrive, the campus and everyone on it had such a great energy. I’m from a college-town in New England so I was used to snowy winters and campus life.

What’s one thing you hope students who take a class with you will come away with?
I hope students will walk away from class thinking more critically about the world around them. Every part of our lives are shaped by structures of power, inequality, and resistance against them, whether we want to see it or not. I hope my courses will offer students not only knowledge about the topics we study but also the tools to critically analyze and thoughtfully express ourselves.

Do you feel your work relates in any way to the Wisconsin Idea? If so, please describe how.
I agree that we have to be constantly thinking about the effects of the work we do and the ways in which it shapes the world (and state) that we live in. However, to me it isn’t as simple as “How will my work help solve people’s problems?” but rather “How can the work I’m doing help others think critically and bring that sense of justice, equity, and ability to imagine a better world to whatever they chose to do?”

What’s something interesting about your area of expertise you can share that will make us sound smarter at parties?
The term “transracial” actually originated within the mixed race adoption community as a way for adoptees and adoptive parents to reference their complex relationship with race. It was first used to describe the domestic adoption of African American children by white parents but has come to be used by Asian adoptees and other adoptees of color who are a part of mixed race families. Despite popular debates and news media, it is NOT analogous to transgender identity.