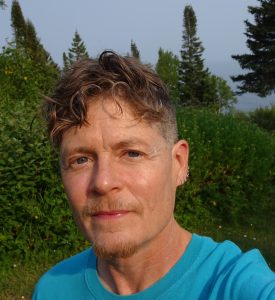 I specialize in history of sexuality and gender with a focus on queer theory and trans*, queer and feminist social movements in the 20th century United States. My work is also animated by queer crip studies, critical race and indigeneity studies, graphic art and comics studies.

“Stuck in the Paradigm with You: Transfeminist Reflections on History and the Spaces of Contradiction.” Abigail Stewart and Sarah Fenstermaker, Gender, Considered: Feminist Reflections Across the U.S. Social Sciences. (Palgrave MacMillan, 2020)

“I Am a ‘Situation Like This’: Names, Pronouns, and Learning from Chelsea Manning” in North Philly Notes, September 4, 2013

“The Education of Little Cis: Cisgender and the Discipline of Opposing Bodies” in Transfeminist Perspectives: In and Beyond Transgender and Gender Studies. Temple University Press, 2012, p. 60-77.

“Octopus” (watercolor and ink), in Chelsea Thompto, ed., Trans Actions: What I Say When I Say What I Shouldn’t” forthcoming.