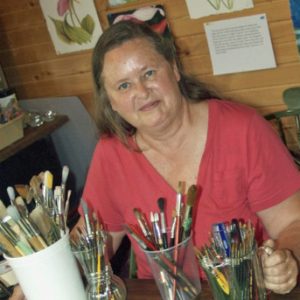 Helen Klebesadel retired as Director of the Women’s and Gender Studies Consortium in Fall of 2018 having served in that role since September, 2000. She came to Academic and Student Services (ACSS) from Lawrence University in Appleton, Wisconsin, where she served as an Associate Professor, on their faculty since 1990. At Lawrence University she taught art and interdisciplinary courses, served as Chair of the Art Department, and participated in the college’s interdisciplinary Gender Studies Program. An artist herself, Klebesadel is best known for watercolor paintings examining feminist themes. Klebesadel is a past national president of the Women’s Caucus for Art, the Nation’s oldest and largest multi-disciplinary feminist arts organization. In that capacity, she led a delegation in 1995 to the NGO Forum of the United Nation’s Fifth World Conference on Women in Huairo, China. Her art and prose have been published in Frontiers, Feminist Studies, and CALYX. Klebesadel contributed an essay entitled “Reframing the Studio Art Critique and Practice,” to the 2006, New Museum Theory and Practice: An Introduction. She also co-authored, with Lisa Kornetsky, an essay, “Critique as Signature Pedagogy in the Arts “ in the forthcoming book Exploring Signature Pedagogies: Approaches to Teaching Disciplinary Habits of Mind. Helen’s artwork can be seen many places online including the Feminist Art Base of Brooklyn Museum’s Elizabeth A. Sackler Center for Feminist Art, and on her own website http://Klebesadel.com .