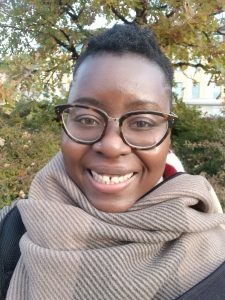 As an interdisciplinary feminist historian of Africa, I am particularly interested in the gendering of identities in Africa. The dominant themes that connect my research interests and publications to-date include how the constructions of gender inform the comportment and performances of the body, religious beliefs, and political ideologies. I have been invited to give plenary talks on my research at various academic institutions including Paris Diderot University (France), University of Leuven (Belgium), University of Buea (Cameroon) and Northwestern University (United States).

My book, Gender, Separatist Politics, and Embodied Nationalism in Cameroon examines the gendering of political identity and separatist movements when Cameroon was a federal republic, 1961 to 1972. I draw from history, political science, gender studies, and feminist epistemologies to illuminate how women’s everyday actions became key to shaping the Anglophone Cameroonian nationalist movement in the predominantly Francophone country. I define and use the concepts of “embodied nationalism” to illustrate how political elites and formally educated urbanites implied that women’s everyday patterns of behavior and comportment might project a suitable Anglophone Cameroonian persona locally, nationally, and internationally. In highlighting the strategies women used to navigate a turbulent political setting, my book provides a useful background to the long-standing Anglophone Cameroonian separatist/secessionist movement specifically and useful entrée to understanding women’s roles in separatist and secessionist projects across the world, such as in Canada (Quebec), the United States (Puerto Rico), and China (Hong Kong).

My second book project, Transnational Histories, Nodes of Encounter, and Belonging in Africa, uses the early spread of the Baha’i faith in Africa as a case study to illuminate new transnational histories. A religion with roots in Iran that teaches the unity and equality of all religions and peoples (including gender and racial equality), Baha’ism gained thousands of adherents in colonial Africa during the decolonization period of the 1950s and 1960s. Early Baha’i converts, mostly young men, proselytized the faith throughout West Africa. Through Baha’ism, early converts traversed spatial boundaries, forged new spaces of belonging, and, ultimately, fashioned new (post)colonial identities. While transnational historical work in Africa has usually focused on the slave trade, the project contributes to the burgeoning field of post-national transnational history. In what Fiona Paisley and Pamela Scully highlight as an important aspect of transnational history, the project decenters “the nation and the state as the natural foci of historical experience and historical enquiry” (Paisley and Scully, 2019: 1). I examine and employ the use of “transnational biographies” (Hannerz 1996) and what I term “nodes of encounter” to privilege everyday experiences of individuals and provide new color to our understanding of decolonization in Africa.

I’m currently working on additional projects. The first is an edited volume (co-edited with Alicia C. Decker and Maha Marouan) that examines the state of scholarship on African feminist history. The second project is a graphic novel on the Anlu Rebellion that will visually inspect how Kom women in western Cameroon disturbed local political power and protested against British rule in the Southern Cameroons from 1958 to 1961 (the women won).