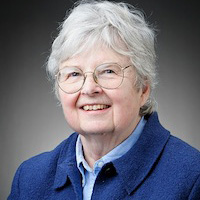 Over the years I have presented scores of papers at various conferences and universities in the US, Canada, Britain, Italy, and Germany. These presentations have focused on medieval women saints, heroics of virginity, monasticism, policies of enclosure, gender and sacred space, pilgrimage and miracles, and medieval embroidery. In 2002 I designed a new upper level Women’s Studies course at UW-Madison with a focus on Historical Perspectives of Gender, Space and Place (from the ancient world to modern times.) Since 1972, in my position in Continuing Studies, I have taught a variety of medieval history and art history courses and have organized many different interdisciplinary medieval classes for adults. I have also organized and led thirty-one University of Wisconsin Continuing Education medieval seminars to France, England, Scotland, Wales, Ireland, Spain, and Germany.

Working title: Gender and the Construction of Sacred Space in Medieval Society: From Womb to Tomb, ca. 500-1300. Book length manuscript in progress.