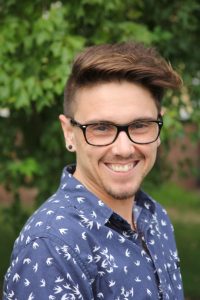 This award was announced at the virtual GSCC Rainbow Graduation event on May 7, 2020, and the video announcing the award can be found here.

This year marks the 8th year of the GSCC bestowing an Honorary Rainbow Degree “on a faculty, staff, or community member who has been a strong partner to the Center and/or its Mission. This partnership may include co-sponsorship, student support, or working for LGBTQ student’s needs or communities outside of the Center’s programming.”

Professor Barcelos uses “the lenses of Feminist Science Studies and Queer of Color critique to examine how scientific discourse is in health promotion, both reveal and reproduce inequalities along the lines of race, class, gender, sexuality, nation and ability.” Below is a quote from one of the students who nominated Professor Barcelos for the Honorary Rainbow Degree.

Both inside and outside of classes, Chris has shown exemplary commitment to the LGBTQ+ community, which is including being one of the most empathetic professors I have met, especially when it comes to students who are LGBTQ+. This has been made even more visible during this pandemic, as their course that I was in became a safe hub for numerous students, including myself. Chris shows by example what queer pedagogy and queering pedagogy truly means. And students I have talked to have said that Chris makes them feel so seen and validated is one of those professors who just gets it. Chris truly pushes to lead by example by advocating for the LGBTQ+ community on campus and also teaching about the intersectionality of identities that involve queerness. In nominating Chris for the Honorary Rainbow Degree, I want to make sure they know and understand how much they are cherished and how grateful other students and I are for them being part of this campus.